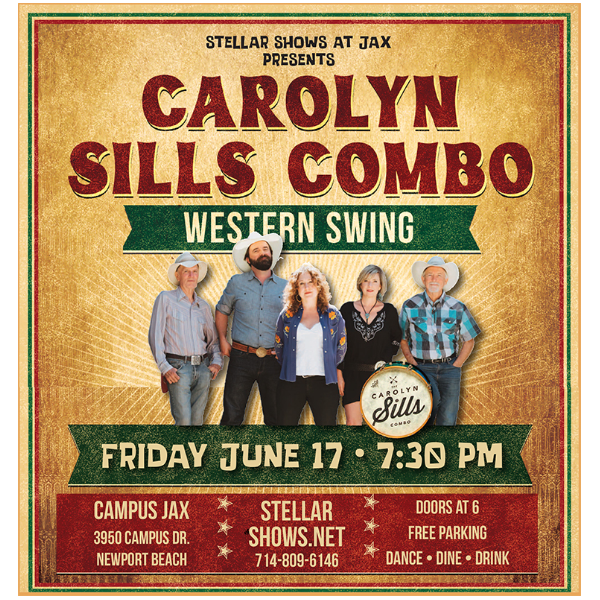 VENUE NOTE: Entree required - this is a supper club, and menu items start at just $10. No drink minimums.

Portion of the cover charge goes to Feed The Need, the Campus JAX outreach to feed the local homeless population. Over 15,000 meals served.

They are back! Fans of Western Swing know Carolyn Sills makes the Swingin' music we all love to dance and listen to. Has it really been almost three years?

The Carolyn Sills Combo and Stellar Shows are happily reuniting for an evening of Western Swing and Americana music. Get ready to dance to tales of the Yukon gold rush, baseball history, Marty Robbins and maple glazed doughnuts, told by dueling guitar and steel leads, three part harmonies and the current AWA Western Swing Female of the Year.​

A roots music group with a vintage sound older than its years, The Carolyn Sills Combo is breathing fresh life and heartfelt twang into the timeless sounds of post-war American music. Fans of classic country, blues and western swing from the 40s/50s are falling in love with the band's original songs, written and produced by vocalist/bassist Sills and her longtime guitarist and husband, Gerard Egan.

Sills and Egan are heavily influenced by spaghetti western films as well as their vinyl record collection, citing a wide range of influences from Bob Wills, Patsy Cline and Merle Travis and Les Paul & Mary Ford.

Academy of Western Artists Western Swing Female of the Year.

Paste Magazine​ enthuses, “Sills and her eclectic combo took to the stage like old pros, their professional, fun and charming manner won the crowd over in a heartbeat. This is by far one of the coolest shows I’ve been to in quite a while.” 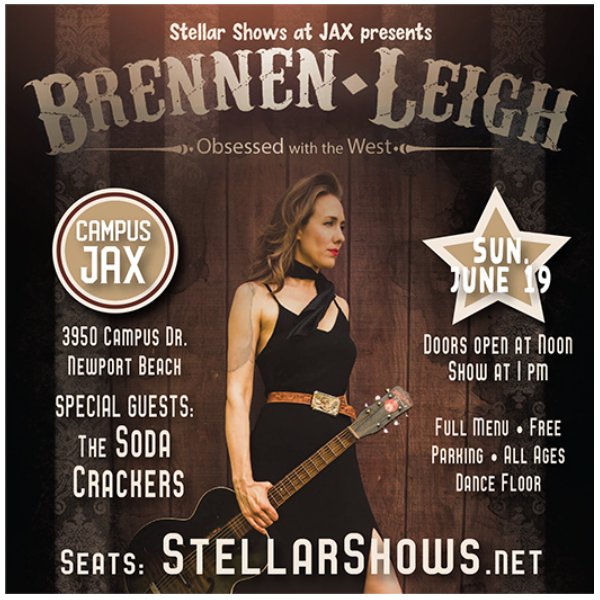 Brennen Leigh - Obsessed with the West

Brennen Leigh is as solid a roots artist as they come, drawing on influences from Hank Williams to Cindy Walker.

Delightfully old-fashioned and born 60 years too late, she’s always worked Western Swing influences into her music, and been chummy with the Asleep at the Wheel crowd in Austin. But now as a Nashville resident, the distance has made her heart grow fonder for that distinctly Texas style of country, and she’s going all in with her new album.

“When I moved to Nashville from Texas, for some reason it triggered another western swing phase in my life,” says Brennen Leigh. “I was out of Texas, but something about the swing was still grabbing me; I was listening to a lot of Bob Wills, and of course The Wheel. I had first been exposed to Western swing through my parents’ Asleep At The Wheel records while I was growing up.”

“Obsessed with the West” is officially be Brennen Leigh’s seventh solo album and includes 12 songs written by Leigh herself, with Cindy Walker as her spirit animal, guiding her pen. And along with duets with Western Swing greats such as Ray Benson, Emily Gimble and Katie Shore, the entire albums is recorded with Asleep at the Wheel at her back, so you know the swing is authentic.

“This is my love note to Western Swing; to the rich culture it comes from, as I see it,” says Leigh, “I listen to and have been influenced by a lot of dead people, but our genre is important, and I think it deserves new life and new songs. The old stuff is where I come from, my songs turn out to be a melding of the old styles, whether I like it or not. I don’t know how not to put it in there.”

The album is not 100% Western Swing, though it is encapsulating of the era when Western Swing was the dominant influence in country music. “There’s definitely a jazz influence, country, and a couple of songs that I would call cowboy or folk tunes,” Brennen says.

Her 2015 album was titled Brennen Leigh Sings Lefty Frizzell, so this is an artist who truly knows the genre.

As part of the new album, she’s made the song “If Tommy Duncan’s Voice Was Booze” which is one of the all-time great Western swing concoctions. You re call the classic Waylon Jennings lyrics: “To hear the Texas Playboys, And Tommy Duncan sing, Makes me proud to be from Texas, Where Bob Wills is still the king.”

Obsessed with the West (Signature Sounds) is a showcase not just for The Wheel or Bob Wills fans, but for anyone who’s ever curled up with Lefty Frizzell, Billie Holiday, Willie Nelson or even Louis Armstrong.

Leigh’s wise-beyond-her-years perspective comes from her hard time on the road, and her accolades prove it: she is two-time Texas Music Awards Best Female Vocalist, 2018 Ameripolitan Music Honky Tonk Award winner, appeared as a finalist on USA Network’s Nashville Star television show in 2003, and most notably, was champion of the 1993 Vergas Loon Calling Contest as a child.

She has also been featured as an instrumentalist and singer on a myriad of releases by artists such as Jim Lauderdale, Rodney Crowell and James Hand. Having written songs previously for folks like Rodney Crowell, LeAnn Womack, Sunny Sweeney, and Charley Crockett, Brennen Leigh has proven her songs timeless, no matter what era or influence she brings to them.

Now she brings her show to Newport Beach where she is featured in a Sunday matinee at the esteemed supper club Campus JAX where so many of her friends and fellow artists have performed. 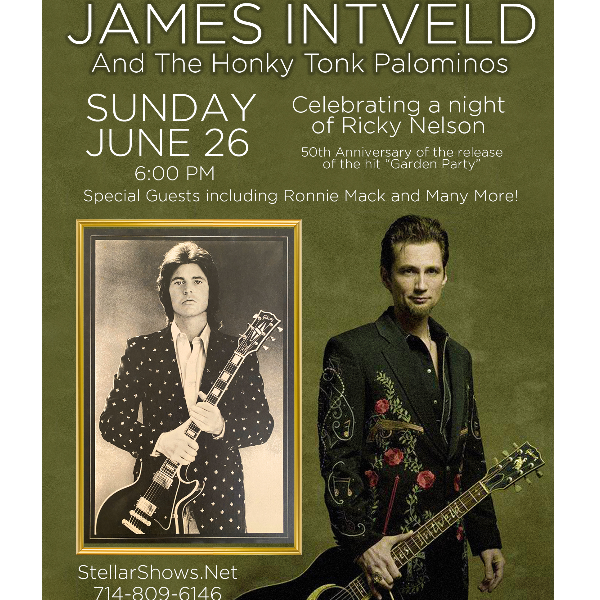 An open invitation from James Intveld:

Please join me in celebrating Rick Nelson and his wonderful music.
50 years ago when Rick masterfully wrote and sang, “You can’t please everyone, you got to please yourself,“ it resonated with this 12 year-old boy. It also resonated with many other music fans and became a huge hit.
Rick was no stranger to making hit records, selling 60 million units - including 24 that went gold.
This show is very special to me in so many ways. Knowing Rick Nelson personally and how he cared about his music, along with my younger brother Ricky Intveld being a member of his Stone Canyon Band, adds an emotional and nostalgic energy to this music.
Be with me and the Honky Tonk Palominos at Campus JAX as my special guest performers and I reminisce in the glory of these classic gems like Travelin' Man and Hello Marylou - in the memory of Rick Nelson and his Band.
Free parking, VIP seating, Full menu, All ages
Campus JAX
3950 Campus Dr
Newport Beach
StellarShows.net 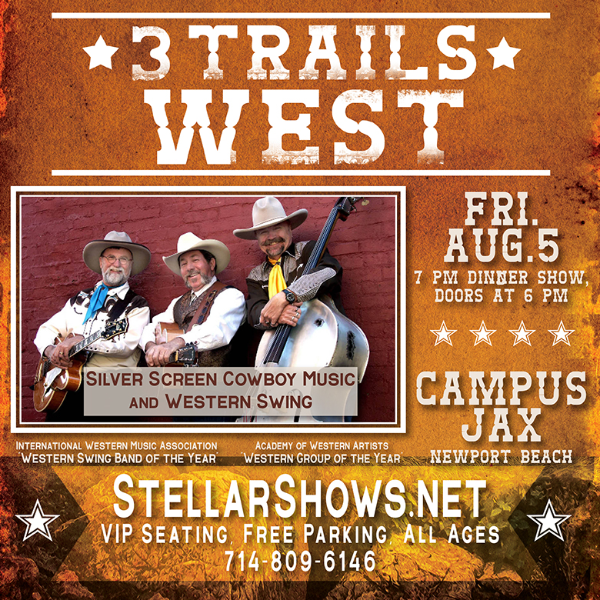 Campus JAX is at 3950 Campus Dr. In Newport Beach near John Wayne. 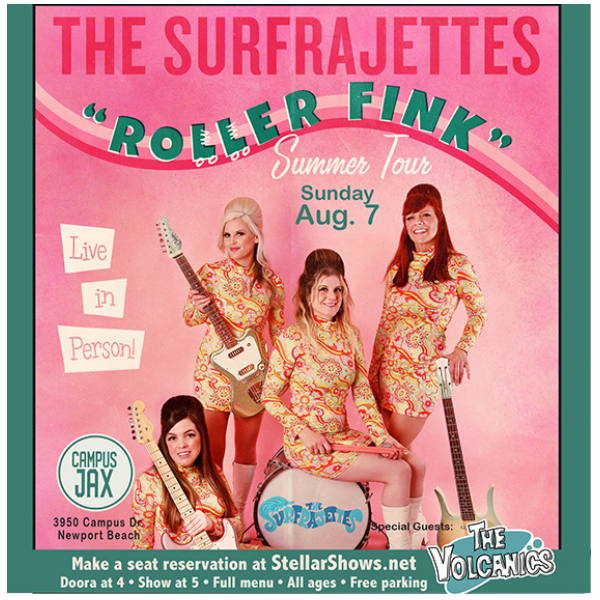 The Surfrajettes are a four-piece instrumental combo from Toronto, ON, Canada. Since forming in late 2015, the band has charmed audiences with their clever mix of psychedelic rock and reverb-drenched surf music, sky-high beehives, go-go boots, and eyeliner as thick as their guitar strings.

The band released the follow up single “Hale’iwa Hustle / Banzai Pipeline” in 2020, supported by a festival appearance at Hi-Tide Winter Holiday: Pittsburgh. The group spent the rest of 2020 and most of 2021 writing and recording their debut LP “Roller Fink” - in stores worldwide April 22, 2022 from Hi-Tide Recordings / Virgin Music. The album will be available for purchase for the very first time following their performance at the Viva Las Vegas Rockabilly Weekend 25 car show.

The Surfrajettes are guitarists Shermy Freeman and Nicole Damoff, bassist Sarah Butler, and drummer Samantha Maloney. When not on tour, the group is busy woodshedding in their secret beach hut, sewing new miniskirts, debating vintage gear, and daydreaming about performing in a Quentin Tarantino movie. 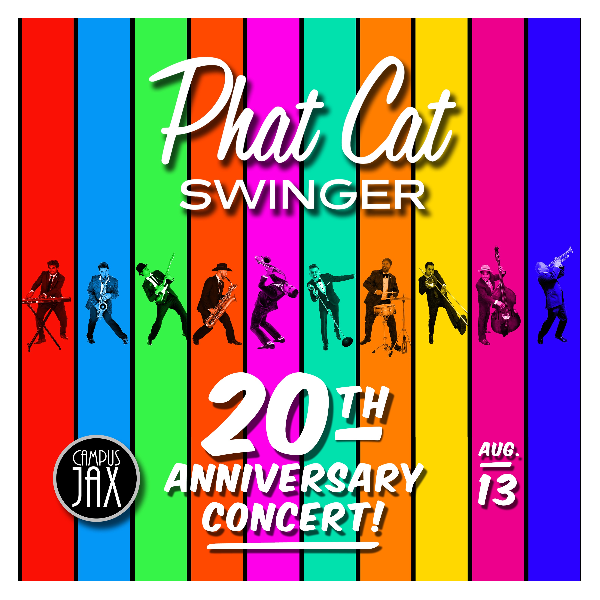 It's the social event of the season!
Join your favorite Phat Cat Swingers as they entertain you at Campus JAX on Sat. Aug. 13 at 6:30 pm
They are pulling out all the stops to make this the best party ever.
Dine, dance and drink in an intimate supper club near John Wayne airport.
Free parking, all ages.
3950 Campus Dr. in Newport Beach near John Wayne airport. 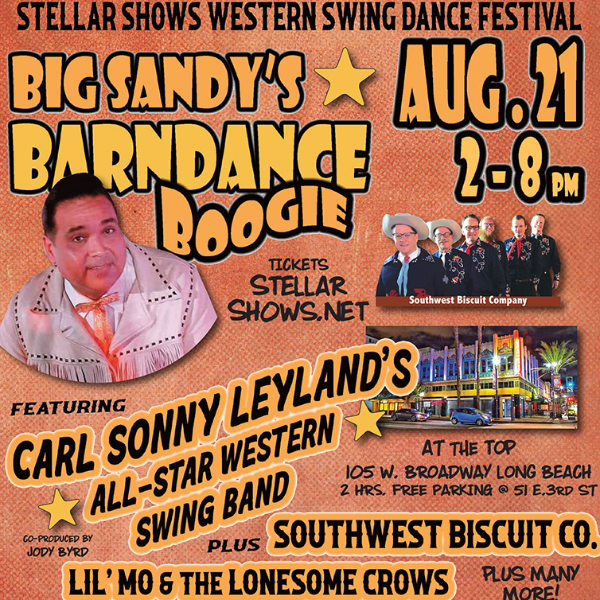 Big Sandy’s Barndance Boogie is a vintage Western swing festival, and it's your chance to experience FOUR authentic Western swing bands — plus our Honky Tonk Angels – and plenty of dance music past and present.

Our host is Big Sandy, who will be spinning those classic Western swing tunes with rockabilly and honky tonk in the mix.

The Honky Tonk Angels are Abby Girl, Amber Foxx, Lil' Sue and Natalie Mendoza, adding their voices in a variety of ways.

Enjoy a chuckwagon barbecue buffet - and a full bar - while you dance the day away in this swingin' matinee festival.

Whether you're sippin' a jug or just cuttin' a rug, Western swing makes good-time music for all ages.

At The Top is a spacious and historic Long Beach venue which is all dance floor at 105 W. Broadway at Pine Ave. in downtown Long Beach

There are 2 hours of FREE PARKING a block away in the large public garage at 51 East 3rd St., plus there are numerous parking lots and metered street parking nearby.